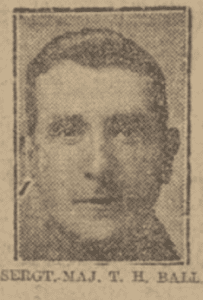 Was born in Melling and until the age of 9 months was living at Bank Lane Melling along with his parents James aged 36 and his Mother Ann aged 38 along with their 6 children. In 1901 the whole family were living at 9 Alice Street St Helen’s and in 1911 the family are now living 54 Thompson Street Toll Bar St Helens.

In 1914 Ball was in the 2nd/5th battalion of the South Lancashire Regiment and in November proceeded to Blackpool for training. In 1915 the battalion moved to Tunbridge Wells in Kent for home service, principally for the defence of London. This continued throughout 1916, but on 16th February 1917 the battalion en trained for Folkstone and from where they sailed for France. The battalion saw service around the Armentieres area which at the time was considered a quiet area, but on Christmas Day 1917 the battalion received heavy German artillery fire and it was during this that Ball was killed. He is buried in Bluet Farm cemetery West Vlaanderen Belgium, he was 26 years old.