We hosted a WW1 Aintree and Melling Exhibition to share and collect information and artefacts. The local community were invited to this through school and local churches. We have links with a number of people who have their own personal collections of WW1 memorabilia, and know that they want to share these collections at such an event. The exhibition included a WW1 Motorbike, uniforms, trench maps, posters, as well as a ‘Padre’s Tent’ for quiet reflection, and a looped slide show showing photographs from the era. There was space for people to share and talk about the stories behind their personal collections eg Private Harker’s Diary (an original diary of a local soldier describing his personal journey through the war). Members of the local community were able to share their own stories at this event.

Children from local schools attended this event, which was based at Aintree Davenhill, and were thrilled to be able to dress up in and hold WW1 artefacts in their hands. The exhibition was very well received by the teachers too, who felt that it very much brought their project to life. 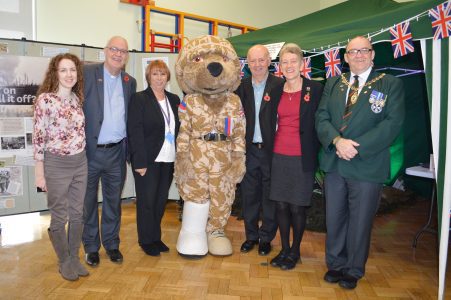 In November 2016, we were lucky enough to have a workshop at Aintree Davenhill Primary School about WW1. A group of local people brought lots of memorabilia and set up a mini museum for the local community to come and see!

The hall was laid out in different sections of facts and items to see. We were also given a leaflet to complete as we moved round the room. Each section was different to the others We got put into groups of seven or six. Mr Gill’s area was items of guns, bullets, helmets and uniforms. We also got to wear the helmets. The English helmet was like a round bowl with net surrounding it. It was really heavy and wobbled as I walked .The guns were extremely heavy too, they held much more weight than you actually thought! If any soldiers died and if anyone didn’t have a bullets to fire they would take the dead soldier’s bullets.

There were two ladies from Help The Heroes charity and one of them spoke to the whole class about her son’s experience going through the war, and the other lady explained what the Help The Heroes was about what we can do to help them .

On the other side of the room, there were books and bibles posters, pictures and postcards  – you could even write your own postcard. Next to it was a wall of lots and lots of different facts about World War One. Some of the facts could be the answers to our activity leaflet.

I really liked the exhibition because you got to hold and wear the items and listen to unbelievable stories. Learning lots of fact about WW1 made it feel so real!