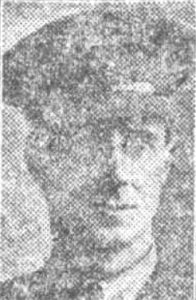 Robert McNeil Crawford McKenzie was born at Liscard. He was living at Adelaide, Australia when he enlisted in the army. He was the son of Robert and Margaret Ada McKenzie of of 102 Princes Road, Princes Park and 12 Coerton Road, Aintree and Redfern, Lyndhurst Road, Wallasey.

News has been received that Lieut. Robert McNeil Crawford McKenzie died on the 21st ult, from wounds received in action in France. Lieut. McKenzie was the second son of the late Mr. Robert McKenzie, of the firm of E.M. Crawford, of this city. He joined the Australian Imperial Forces on the outbreak of war. The eldest son, Aubrey, was killed on active service on August 21 1916.

Liverpool Echo 2nd October 1917. Probate of his estate was obtained at London on the 13th April 1918 by George Tyson Sedgwick, solicitor. His home address was Woodhurst, Millswood, Adelaide, Australia and his effects were valued at £55 9s 1d (£3,200 at current values.)